Quihubo, amigos!? Despite living in Ecuador, I’ve been working so much that La Güera hasn’t gotten many chances to stretch her legs, but good things are brewing so stay tuned. In the meantime, here’s a guest post from a very close friend, Michelle Plascencia. She and I met while working together at a hostel in San Francisco, and since then have gotten ourselves into many an adventure, from terrorizing the quiet redwoods of Big Sur to bar-hopping in San Francisco’s Mission District and everything in between. I even followed her through South America (or at least as far as Peru) without ever actually catching up to her. She’s a wanderlust soul sister to the fullest extent.

On February 6th, 2014, I boarded a one-way flight for Bogotá, Colombia, with an open mind and heart, ready to let the spirit of travel guide me. I was an anxious twenty-something filled with wanderlust, but I was in many ways ready for this aimless journey.

Little did I know that I would have a love affair like none I had ever known — with Chile: its culture, its people, the landscapes, the lovers, friends, and connections that were so indescribable. You know that feeling when your stomach is filled with butterflies? Chile filled me with this unexpected fluttering for four months.

South America is filled with culture and beauty. Each country has its own spice and flavor. As I made my way south through Colombia,  I was fortunate enough to meet Elliott, in Popayán. I instantly felt a bond with Elliot, a connection that was refreshing to a solo female traveler. I was nervous about crossing the border alone into Ecuador, but Elliot — a male, Chilean, travel guru — held my hand as we stepped from one country into another.  He understood why I was traveling alone, but was also compassionate about my fear. We parted ways again in Quito, from which I continued on to Baños in the south. I was thankful for Elliott’s guidance and had faith that I would be blessed with more characters like him on my trip.

I made it to Baños, the moment I like to refer to as the pinnacle of my trip. This is when I first felt it — the loneliness of traveling, the excitement and hesitation, the frustrations felt at times when I didn’t know what to eat or where I would feel safe. Transylvania Hostel became my home for seven days. This is where I met my great friend Camila, my roommate in the dorm, and another solo twenty-something female. Camila, born and raised in Santiago, Chile, understood my love for travel. She also understood why I was doing so alone, why I wanted to be alone. The hostel was filled with solo travelers, groups of Chileans, dudes from Argentina, France, and the U.S., including sweet Alex from Indiana. We were a mixture of everywhere. We shared many moments together, surrounded by the mountains in Baños, but we all knew what every traveler knows: that the journey continues. Camila and I parted ways and exchanged information so we could keep in touch, but what does keeping in touch really mean?

I made my way down to Máncora, a beautiful coastal town in northern Peru, accompanied by Alex. After a few days of partying and lounging oceanside, it was time yet again to say goodbye. I parted ways with Alex and boarded my 17-hour bus ride from Máncora to Lima, Peru’s capital. The bus ride was filled with emotion, excitement, and loneliness, the latter of which overcame me when I realized I was saying goodbye to a lover that I would probably never see again. Sure, we can keep in touch, but will that spark, that bond that we once shared, be the same?

I stepped off the bus in Lima and was immediately bombarded by taxi drivers clamoring to take me here or there. I didn’t even have my backpack yet, but I already had 15 offers for cab rides. This is when I met Indira and Sebastián. When they noticed my overwhelmed facial expression, they immediately asked where I was going. It turned out we were going to the same hostel, so we walked away from the terminal and the gaggle of taxi drivers together. They were a vibrant, friendly Chilean couple. Indira was a calm spirit, while Sebastián was a louder, macho kind of guy.

I quickly became the third wheel while traveling with this kooky couple, but I felt more like a friend to these new companions who were on the same travel high as me. They would smooch on each other here and there but then they would get into screaming battles while I simply observed, simultaneously taking it in and losing myself in my own thoughts. Their relationship was close to home, as my parents are professionals at yelling battles and making up. Being around them was comforting. We traveled together to Arica, Chile, where they were taking a flight back to Santiago — the same place I was going, only on a thirty-hour bus ride. I was supposed to meet a dear friend of mine there. Indira and Seba walked me through everything: where to find reasonable bus tickets, what to do when I got there, etc. They gave me their addresses and phone numbers for when I arrived, before making sure that I got on the bus and waving goodbye from a distance. Indira and Sebastián… what a whirlwind of love they were.

I finally arrived in Santiago and felt like I was home. I stayed with Camila (my roomie from Baños) and was as welcome as if we had been friends for years!

I later met up with Indira and Seba, and it was as if we were on foreign lands together again. They welcomed me into their homes where  we ate almuerzos, laughed, and later smoked a porro (joint) in Barrio Brasil.

Keeping in touch had a new meaning to me now. It was a real thing. We actually did and still do keep in touch.

As always, the journey continued, and I soon found myself in Punta Arenas, Chile, very unprepared to trek Torres del Paine. Full of ambition, I went to the well-known Erratic Rock to get some pointers for the hike. I was fortunate to cross paths with Osvaldo and Keko, two Chileans who were also prepping for the big hike.

“Yes,” I responded hesitantly, “I am going to rent some gear.”

Five days later, we returned with endless stories, laughs, memories, and experiences that the three of us would always share: the moments we trekked in the rain, wind, snow, and sunshine and even rotated who would sleep in the middle to keep warm. The memories that created the kinship I instantly felt with them. The hike wouldn’t have been the same alone. As I hiked eight hours a day with Osvaldo and Keko, I imagined doing it alone. The magical moments of the breathtaking landscape would have been the same, but the happiness I felt as we approached Glacier Grey wouldn’t have been as magical if I had been alone. Sharing these moments with strangers felt wholesome. Once we got back, I headed back up north while they continued south into Argentina. As always we urged each other, “Keep in touch!” We embraced and parted ways.

I was finally heading out of Chile and into Bolivia. I stopped in Pisco Elqui, Valle de Elqui, Chile, a small town tucked away in the Andes. I attended a yoga class at Centro Tierra Pura, a holistic healing center, and was mesmerized by the energy there. I felt as though every moment prior to my arrival had been aligned to guide me to Pisco Elqui. After gushing about my instant love of Pisco to Loto, the owner, she immediately offered me a room to stay in in exchange for helping her while she traveled for work. I was a solo female wanderer, no plan or itinerary, and everything that I had experienced in Chile had brought me here, so I said yes. I was able to participate in meditation ceremonies, yoga, and other holistic healing practices.

The times spent in Pisco Elqui enriched my relationship with myself and opened my mind to the encounters that life has to offer if you’re paying attention. I learned to embrace the present moment and understand that every moment, happy or sorrowful, is a gift. Sulking in what ifs, would’ves, could’ves, and should’ves tend to bring regret and cause us to forget to live in the present, creating a domino effect that takes away from the enjoyment of the now. 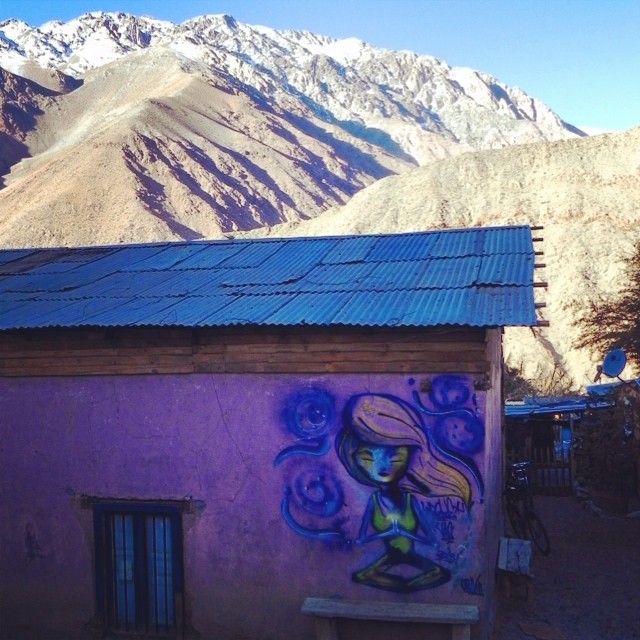 These few encounters that I’ve mentioned here are only a handful of the Chilean people that made me feel at home, made me feel like I could always go back to Chile and be welcome. All these encounters led me to my home in Pisco Elqui at a time and place that I cherish deep within my heart, remembering the moments as if they were dreams.

A surfer in Pichilemu, Chile, told me that there is no such thing as one soulmate. As humans, we are fascinated by the connection we share with an individual. Whether it’s for an hour, a day, or a month, sometimes you feel a connection and sharing those moments together are far more meaningful than waiting and longing for ONE soulmate.

Throughout my trip I came across many soulmates, individuals that enlightened me with their spirit and who allowed my presence to enlighten theirs. We shared special moments and conversations, stared at the breathtaking landscapes of Chile, ate together, drank, hugged, laughed, or simply sat in pleasant silence. Although I don’t keep in touch with all of them, they are all part of the person I have become. They are part of the love affair I had, and will forever have, with Chile.

Michelle is a full-time wanderer and film enthusiast who’s almost always simultaneously training for a long-distance run. After working various film festivals and supporting arts education in San Francisco, California, for five years, she decided to take a leave of absence from her routine lifestyle in the States. Her recent trip to South America sparked a new and unexpected interest — to teach English abroad. Low and behold you can now find her in Incheon, South Korea, teaching energetic preschoolers. It has been a whirlwind of cultural differences and adjustments, but that’s part of the thrill of living abroad, especially in a country that rarely sees a brown-skinned woman. The students, of course, never hesitate to ask why her skin is darker than theirs.

One thought on “A Mexicana Goes South of the Border, Cuckolds Mexico for Chile”