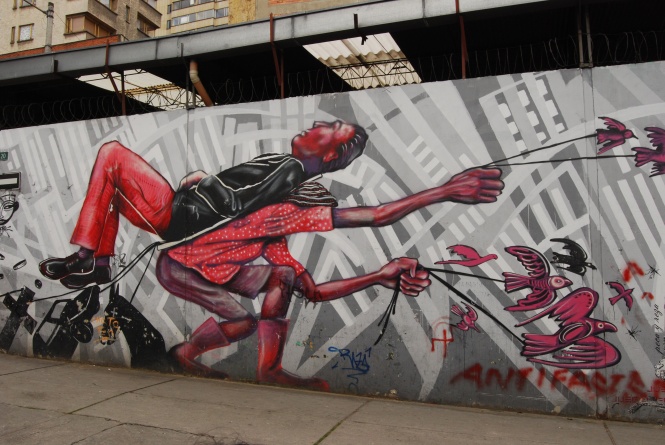 A mural depicting the disparities of wealth in Bogota, Colombia

The other day I went to cash a check at a bank branch in Cuenca I had never been to before. I stood awkwardly in the doorway for a few heartbeats, confused. Like any other bank, there was the security guard standing in front of the impersonal faces of ATMs, there the counter with its leashed pens for signing checks or filling in any of various blanks, and there the bivouac of people waiting to talk to a teller, taught from infancy how to stand silently in line… but where were the tellers? What were these slack-faced people waiting for? I did a double take–at one of the ATMs in front of which a customer was standing, a face peered out of a screen in the top left. She was talking and signaling to the person at the machine, and I watched as the latter put their documents into a tube, sealed it, and stuck it into a receptacle, which then also sealed itself before disappearing. These weren’t ATMs, these were the tellers, but instead of face to face contact, all communication was mediated through a video screen.

I had never seen this, let alone heard about it, which is kind of surprising because, knowing the U.S., it would be one of the first places to implement a system like this. And yet I’m glad I haven’t seen it before and frankly, I hope not to see it again. I’d never considered it before, really. Most of us don’t consciously value the salutations and admittedly superficial pleasantries we exchange with those people we interact so briefly with: bank tellers, waiters, grocery store clerks. And yet in this experience at the bank, I starkly felt the absence of something I had always taken for granted.

I believe one of the universal truths of our humanity is the need for human contact–physical human contact. We live in an age where so much can and has been digitized. Fifty years ago I would have only been able to communicate with my family back in California by mail. Any correspondence would have been in transit for weeks or even months, and, considering that Ecuador’s postal system is lacking even today, would have had a good chance of never arriving in the first place. Now I can talk to friends and family within seconds and I can even see their faces. But I can’t hug them or squeeze their hand or smack them gently on the shoulder in loving antagonism. They can’t comfort me when I’m ill. Lovers can not feel each other’s skin over Skype. Mothers can not kiss their children over FaceTime. Words can travel through the ether of space, but the warmth of our bodies, the unique smell of our skin and hair and breath, and the authenticity of our whole selves are completely lost in it.

It’s the thought of all this that bothers me and leaves me cold when I go to a bank and speak only to a machine, where once I had an exchange with a person, however fleeting and thoughtless. If human contact is one of the most important factors of our most basic levels of happiness and well-being, what does it say about us that little by little we are taking it away from ourselves? What, exactly, is the point of it? It’s simple, unfortunately. It’s done for money, for the care and keeping of it. Money is the how and the why, the justification for that removal of person from person. If human contact is a basic ingredient to our existence, then money is its anathema.

One reason that people travel, in my opinion, is to connect with others. Of course, those who never stray far from where they’ve lived their entire lives connect with people daily too, and yet it is a kind of homogeneous connection, one of comfort, of the surety that comes with an innate familiarity with your surroundings. While traveling, that comfort and surety is stripped away, leaving us bare and raw, vulnerable to the intentions of others. Without the insulation of home, our interactions with others are necessarily more open. We are not standing on solid ground when we strike up a conversation on a bus or in a hostel, especially if the person with whom we are trying to connect does not share our primary language. And yet I think it is because of the fragility of the situation that sometimes the connections we make on the road burn brighter and more fiercely than the majority of those we make at home, even if these connections last no longer than an hour, a day, a week. Just like with love, we have to open ourselves up to an excruciating extent in order to experience more deeply what we have in common with one another.

This is not all travel. This is the kind young people do most commonly, with a backpack and a few thousand dollars and little else, besides a tenuous hope that the time ahead of them will be filled with the many permutations of truth and that they will find their lives filled with a conscious kind of intention they hadn’t known before. But there is also the travel that older and more affluent people tend to do, the kind that includes words like all-inclusive and itinerary and package deal. In my mind this kind of travel is like a bubble. You step into it and then float through foreign places like in a dream, because all real connection and experience bounces off this effervescent barrier you have created around yourself with the help of money, whether this is out of fear or jejune ignorance or willful blindness. These people are often not interested in the infinite connections to be made with people from different backgrounds, belief systems, and socioeconomic underworlds, but rather travel as if they were in a zoo, interested only in the strangeness of the exhibits, but both very aware and very grateful for the bars that keep that strangeness from truly touching them. I believe that what they fear in these would-be encounters is that the world view they’ve built their life around may be challenged and irreparable chinks may begin to appear in a belief system that once seemed so solid. It is easier to keep any such threats at a physical remove.

Money is capable of many things. It can open up vast vistas of opportunity and fight off death and old age (though not for long), it can buy comfort and style, but one thing it has never done–because it is antithetical to its very nature–is bring people closer together. Instead it creates walls between us, invisible strata that separate us from one another. It was with the intent of protecting money that someone came up with the idea to have bank tellers sit in undecorated, impersonal rooms and talk to customers through a video screen, pushing money into space-age tubes of plastic in exchange for documents, and sending them to the other side through bulletproof glass, because in the eyes of those who consider the true currency of life to be monetary, it is those flimsy bills that need to be protected and valued, as opposed to the emotional, marvelous beings on either side of the barrier.